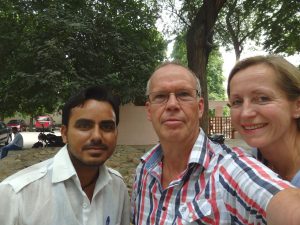 In three weeks’ time we made a beautiful and special journey through India, starting in Delhi and finally arriving in Varanasi. The last week we had a beach holiday in Goa to recover from the many impressions and experiences. During these three weeks, Ajay has driven us around in a great way through India, the classic route; Delhi, Mandawa, Bikaner, Jaisalmer, Jodhpur, Ranakpur, Udaipur, Pushkar, Jaipur, Agra, Orchha, Khajuraho and Varanasi.

Now we understand that a lot of tourists take the train to Varanasi; some roads were very bad from Agra, but it was a beautiful route. Driving a car in India is not for Western tourists: very chaotic traffic, cows and other beasts, pedestrians, cars, moped and cyclists. Everything is crisscrossing each other. 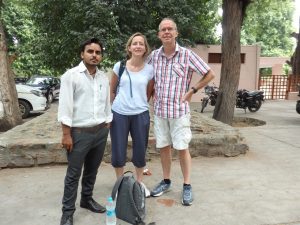 India has a lot to offer, but sadly the poverty is also often present among many Indians. Large groups of Indians are working daily to find work and to survive. Sadly that is also the reality. The hygiene and mess on the streets is daily reality for India. We have noticed that in Goa the mess on the streets is not absent, but less severe than in the area that we have visited. In this respect, still a lot has to change before India can be visited by large groups of tourists. As a Western tourist you feel like you are a “walking ATM cash machine”. 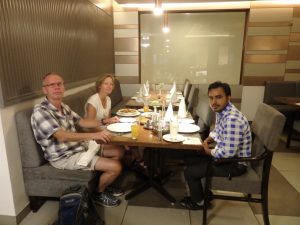 Each time we were surprised how Ajay was able to guide us through the chaotic traffic without damage or accidents. Well done Ajay!!!

Concerning the hotels, we kept some of Ajay’s hotels but predominantly booked them via the hotel sites ourselves. The most important reason for this was that the sites offered big discounts in this period, while Ajay had to do with fixed prices via an intermediary.

Besides driver, Ajay has also drawn our attention to things and helped us as a guide, always in good alignment.

For us India has left behind a special impression; incredible India both negative and positive.