‘By accident’ we travelled in a group with Rattan & Co-drivers through Rajasthan and Agra in March (see: Johan & friends with Rattan & co, March 2014). We liked the journey and local culture so much that we decided to visit other parts of India in October. Because Anil was our driver in March, Anil and myself partly developed our October-trip that was prepared by Rob and we adapted it along the way as one should with a real ‘road trip’. A fun and pleasant adventure with very local contacts as well as a visit to Anil’s family in Northern India. 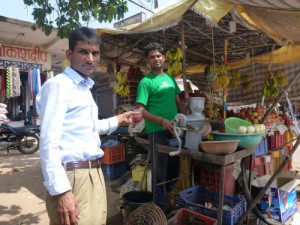 Now our almost a month’s journey went through five districts;

An unforgettable, beautiful, pleasant adventurous trip through Central and North India and good food every day in an alternating scenery of:

Thank you for this beautiful and safe journey…